Robert E. Douthit, better known as Bob, began his business in the mid 1960’s. While working full time for the gas company in Pampa, he began to supplement his income by selling used cars on a small lot on East Frederick Street under the name of Bob’s Used Cars. In 1983 he left the gas company and expanded his business to include the wrecker service. Bob could see that Pampa was in need of a towing company and was prepared to meet that demand. He had always owned a wrecker for towing the cars on his lot and had even driven a wrecker during his time in the military.

In 1987, Bob purchased the old drive-in theater on Barnes Street on the outskirts of Pampa and turned it into a salvage yard selling used cars as well as parts. He moved Bob’s Used Cars into the old concession stand and renamed the business Bob Douthit Autos. His daughter, Rene, came to work for him in the new location, followed in 1988 by her husband, Rick Garrison. The business continued to grow and in 1989 was moved into a new building, 50×100 ft, erected at the entrance to the salvage yard. He was joined for a while by his daughter, Carmen, and son-in-law, William McCarley. His five young grandchildren dreamed of joining “Papa Bob” in his family business, and it was not uncommon to find them riding along on a wrecker call or following him around at the salvage yard. His oldest grandson, Kasey Garrison, joined him as a full-time wrecker driver in 2000. 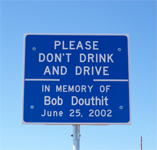 Business was going strong with Bob adding several new trucks and even a heavy duty to his wrecker fleet. However, the summer of 2002 brought great tragedy and loss to his family and friends when Bob was struck and killed by a drunk driver while helping a stranded motorist. In the months following his death, his employees, both family and friends, continued to run the business as Bob had done. His widow, Gwen Douthit, continued as owner of the business while Rick and Rene continued in its management. Kasey became the primary wrecker driver, night dispatch and has assumed a major roll in the management of the Wrecker Service. The youngest granddaughter, Kandice Garrison, left her job in 2008 to join the family business. In 2005 a high school student named Solomon Cruz began working for the company and in 2011 he joined the family when he and Kandice were married.